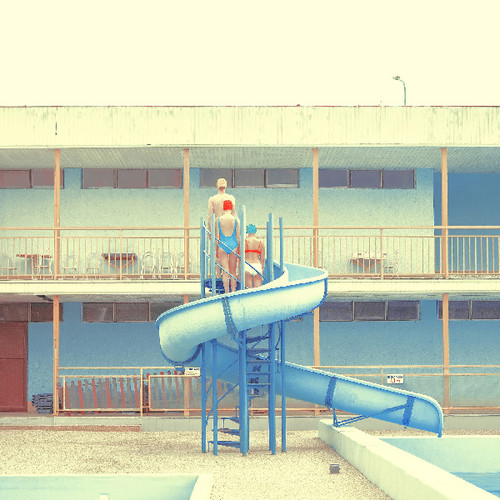 LP version. 180 gram vinyl; Includes download code. The Day are Laura Loeters from Utrecht, Netherlands and Hamburg-based Gregor Sonnenberg. Since meeting at "Hogeschool voor de kunsten" in Arnhem, the two keep reconciling distances, differences, and always new approaches and perspectives. What runs like a thread through all of this is the interest to take charge of things themselves, try out and grow on it together. The Day is where whimsical dream pop meets a DIY ethos learned from hardcore. A sparse, springy, and rapturous dynamic alternates with a wildly imaginative dream-pop harmony, rock, and synths create just as inspiring contrasts as the refreshing, reduced postpunk references. This is continued in the songs by themes that connect and contrast the private and the political as often as possible. The Day's music expresses utopia as well as melancholy in it's escapism and thus refuses to be interpreted in an overly fixed way. The band is an international long-distance constellation, an almost celebratory pan-European idea of unification (which sadly can't be emphasized too often in recent months). The Day have released two EPs by themselves, were constantly on the road, supported Kate Tempest live, and have formulated their own version of melancholic pop music. The two continue to work on creating their own version of introvert, melancholic pop music: intimate without being intruding, and speaking with inner calmness.