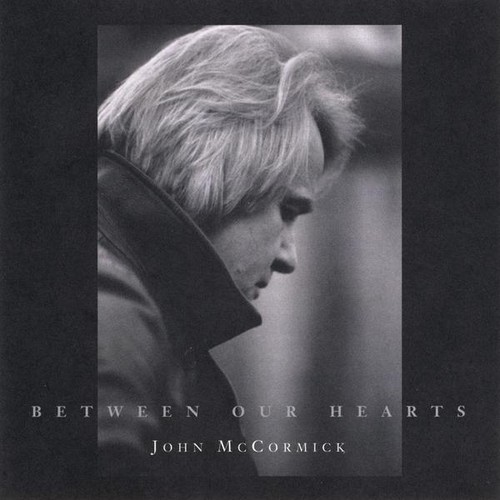 Between Our Hearts
Artist: John Mccormick
Format: CD
New: Available to Order - Not In Our Store 19.98
Wish

John McCormick is a modern minstrel with gentle wit, sensitive vocals, and wicked guitar skills. He has mastered the intricate styles of the American, Irish, Scottish and English folk traditions while developing a rich, resonant and wonderfully expressive voice. John regularly performs throughout Europe and North America. He has recorded seven albums and CDs on the Phantom Records label. 'He spins tales with the command of a fine storyteller.' (Seattle Victory News) John McCormick was born and raised in Indianapolis. While studying philosophy at Ancilla College, he met Gordon Burnham and Bob Beaser, two exquisite pickers from Kalamazoo, Michigan. They inspired him to take up the acoustic guitar. He landed in San Francisco in the early Seventies, where the music scene was thriving. More auspicious meetings followed. He met his first teacher, Alan Rice, through an advert in a local rag which offered used household appliances, and as an afterthought, 'Jansch and Renbourn style guitar instruction'. Eventually, Al steered him to a meeting with Duck Baker, who became another mentor. As the Eighties approached, John took advantage of the unworldly and lonesome hours of a railroad brakeman by simply playing in all the wee hours and listening to newer influences, John Martyn, James Taylor, Nick Drake and Leo Kottke. Sometime in 1985, John was playing a Happy Hour gig at a comedy club in San Francisco when he was discovered by Alex de Grassi, who had stopped by for coffee and madeleines. This chance meeting led to his first recording, Western Island. This guitar--focused project, with instrumentals and songs from Scotland, Ireland and England, established John on the acoustic scene. Originally released by Shanachie Records, it has been reissued by Phantom Records. 'A bit of paradise for fanciers of fine acoustic guitar playing' (Roots & Rhythm News) John's touring career began with the success of Western Island. His next album, Mercury's Well, was released in 1992 and named to the yearly Top Ten at radio WUMB--Boston, the planet's premier folk music station. 'A fine collection of moody songs, strung together like pearls.' (Hear Music Magazine) Between Our Hearts (1998) contains two original guitar tunes and two traditional ones, along with nine songs from before and now. With the support of Maggie Boyle, Steve Tilston, Judi Meister, and other notable guests, 'These songs establish McCormick as the official troubadour for the 21st century.' (Bob Mitchell, Louisville Music News) Live At The Freight (2002) was recorded at the finest acoustic venue on the west coast, The Freight And Salvage Coffeehouse, in Berkeley, California. This is an arresting mix of contemporary and traditional repertoire, performed before a live audience. The Farthest Field was recorded in Louisville, Kentucky. It includes ten classic North American songs, and one burning guitar instrumental, Railroad Blues. In 2006, he recorded Listen To Your Heart, a collection of original guitar duet compositions, with Gordon Burnham. 'In the vast realm of contemporary conscious music that claims to offer an invitation inward, LISTEN TO YOUR HEART is a refreshingly authentic instrumental work that truly delivers on it's promise.' (NEXUS Magazine) John's new CD is Essential Guitar Tracks (Phantom Records 2008), a collection of his solo acoustic guitar pieces.