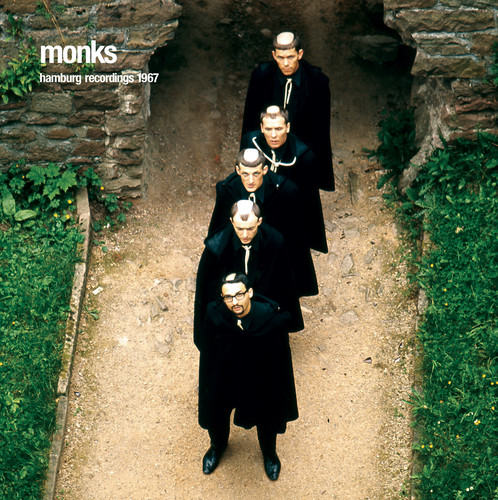 The Monks – a strange, rare group with a story that sounds like a drunk friend’s generous hyperbole. A group of American G.I.s stationed in Germany on the precipice of Western cultural revolution starts playing music loosely connected to the rock n’ roll craze, contrastingly incorporating a critical and often offensive avant-garde edge. Nothing was off limits — screeching vocals, dark aesthetics, staccato-strummed banjo, sardonic lyricism, critiques of the Vietnam War and full monk costuming down to the tonsure. When viewed on the whole, it seems like an art school student’s senior thesis on what the craze means and its future possibilities. Due in large part to original Polydor vinyl collectability and years in the word-of-mouth hype machine, their legend and cult status has steadily blossomed since their last shows in 1967. Fast forward to 2017, the crew at Third Man, already huge fans, are presented with an honest-to-God treasure trove of original Monks photos, newspaper clippings, business cards, letterhead, contracts, postcards and, yes, analog tapes, containing trailblazing, wild compositions completely unheard by public ears. “I’m Watching You” would have been recorded on February 28th, 1967 at the same sessions that would produce the Monks’ final single “Love Can Tame the Wild” b/w “He Went Down to the Sea.” The remaining four songs were recorded after hours in the Top Ten Club later that year, just prior to the break-up of the band. These songs have been unreleased for 50 years and are quite possibly the last music left to be heard by this legendary band.
This website uses cookies to personalize content and analyse traffic in order to offer you a better experience.
I accept Learn More
back to top