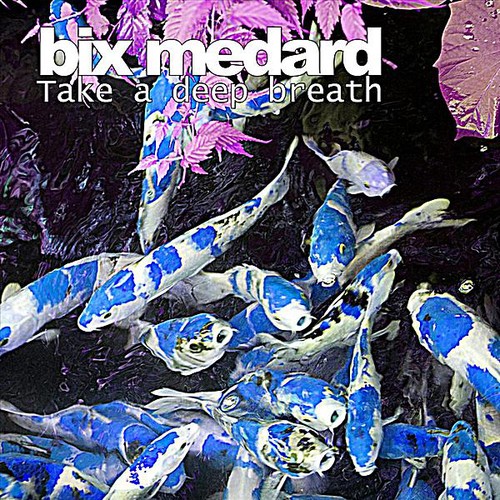 3rd album by trip-hop duo Bix Medard. 12 very personal tunes, dark lyrics on trippy slow beats with new wave basslines and electro-gothic arrangements. Mostly sung in French, some sung in English, Japanese and Italian. CD Review. Bix Medard - Take A Deep Breath (Altair Musik) By Dominic Valvona, for God is in the TV zine (UK), May 31, 2011. The amorous cooing and slowly unfolding, finely-tuned, sculptured soundscapes of Bix Medard prove a challenge to define or sum up in any review. Part conceptual, and partly recondite yearning pop; the pairing of Norwegian chanteuse flute player Bix, and her Belgian sparring partner Peter Clasen - also known as Medard - are often filed under the "nouvelle chanson FranĂ§aise" tag, which goes some way towards explaining their brand of Euro-rich synth and live instrument sound. Bix switches between dialects; breathlessly wooing, dictating or incidental meandering in French, English, Italian and Japanese; all the while a much understated, yet acutely arranged and executed, trip-hop backing track underwrites each of the 12 oblique traversing songs. Strains of Portishead can be heard throughout, as well as the occasional reference to Holger Czukay's U-She collaboration - especially on their more melodic synthesized string moments - and even nods to Pil. On the moronic slow-jazz thriller, 'Apart', they rework Blondies 'Sunday Girl' for the ambient trance market, and filter the Pola X and Toxic Affair soundtrack compositions of Scott Walker, with a touch of Outside era Bowie, for 'Sur Les Marches'. Bix Medard's second opus is pretty generous, with a running time of nigh on an hour, though their indolent coquettish drifting musical suites can be laboured - there's at least four tracks that could safely lose a minute, before they fizzle out and run their course. 'Take A Deep Breath' isn't just an album title, it's also an instruction for the experience you're about to partake of: submerged in a post Factory Records haze of drowning electro art. So far one of 2011's more inventive and intriguing albums.